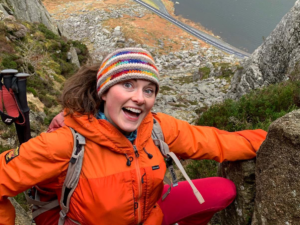 My name is Jen George and I am an Educator, Author, and Adventurer.

In Year 10 I did work experience at Newquay Hospital and volunteered as a helper on the Duke of Edinburgh expeditions and as a leader on school camps.

I used to be really torn between my love of teaching and my love of working in the outdoor and expedition industry. I tried both separately as full time careers at various points and never really settled into either. It took a long time, but I realised that by choosing to combine supply teaching and freelance expedition work as my main sources of income, I now have the freedom of flexibility to explore other avenues too.

Having this flexibility allows me to work on other projects freely. Falling unintentionally into life as an Instagram influencer in 2019 during my 365 Days of Adventure project, I opened up creative work avenues for myself that I never knew existed. I have now written a book about my adventures from that year which will be published later on in 2020 and get paid to speak about my adventures. I’m able to have a hugely positive impact on people’s lives which is extremely rewarding.

Some people know from an early age exactly what career they wish to pursue. I was not one of these people. I didn’t have a clue. I wish now as an adult that someone had said to me when I was 16 and panicking about my future that this was actually very normal and a lot of other students were probably thinking the same!

It’s also okay to forge your own path and, importantly, it’s also okay to change your mind. I was so fixated on the need to be defined by one clear job title that it took me a very long time bouncing between teaching and the outdoor industry to realise that, for me, following multiple avenues of work at once is both possible and what really makes me happy. I used to fear being labeled as being uncommitted or indecisive. But now I celebrate the diversity of my work; having multiple careers running alongside each other has taught me the ability to adapt and to think outside of the box. I now know that this is my greatest strength.