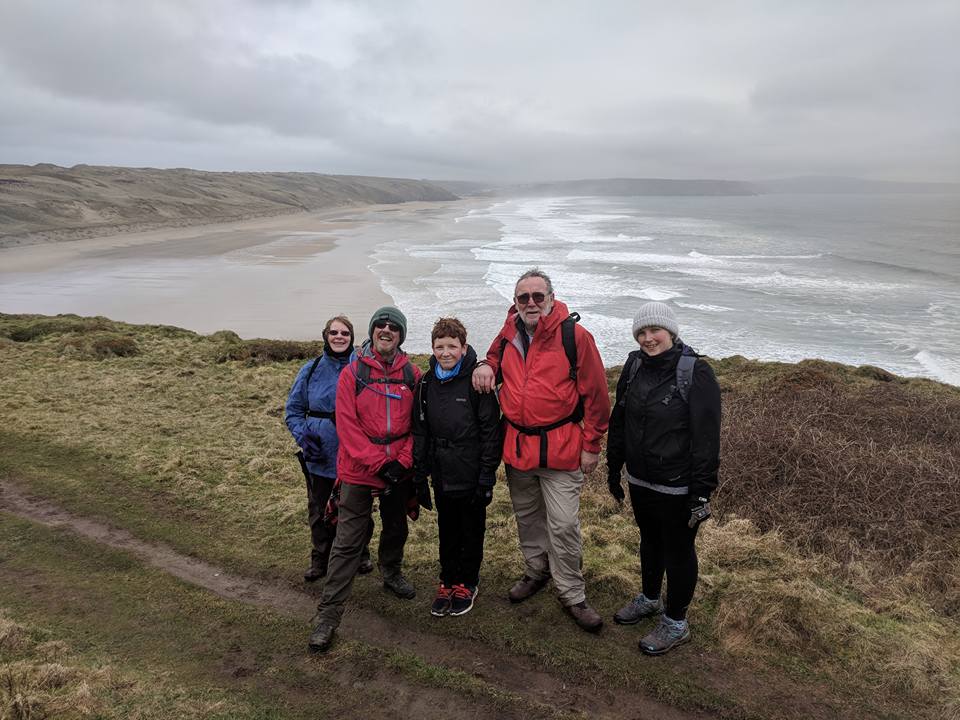 Staff and students from two Newquay academies, Newquay Tretherras and Newquay Junior Academy, have managed to walk a total of 81 miles so far, as they completed the fifth of 12 charity walks as part of the #WalkThisWay project.

Mr Jones and Mr Nicholls, along with a group of friends and relatives, walked a grand total of 15.5 miles from Wheal Coates along the South West Coastal Path across Perranporth Beach and back to Newquay. The group now have plans for a walk to take them over 100 miles as they reach the halfway stage of this year-long project.

Mr Nicholls said: “It was yet another fantastic walk! Our target at this stage was to reach a total of 60 miles across the five walks completed so far, and we are extremely pleased that we have smashed that target. We now want to reach the 100 mile mark at the end of the next walk. Walk number six will be at the Goss Moor Nature Trail, on Sunday 29th April, starting at 9.00am. We’d like to encourage as many people as possible to come out and join us. You can join us to do as little or as much you want.”

The #WalkThisWay project started as Mr Jones, who is the Lead Teacher of Spiritual, Moral, Social and Cultural studies at Newquay Tretherras, was doing some research into male mental health whilst planning an assembly to promote the school’s annual Movember campaign.

Mr Jones said: “I was shocked and saddened to discover that suicide is now the biggest single cause of death in men under the age of 49 – on average, one man commits suicide every two hours. Recently this issue has received some much needed publicity thanks to “This Morning” on television, and we are pleased to be doing our part to raise awareness of it. The issue obviously affects more than only men, so the project is open to anybody who wants to join us for a walk and a talk about the issue of mental health, whatever your gender.”

The Walk This Way team are now nearly halfway through their target challenge of taking on 12 works in 12 months, which each of the walk being set at a minimum of 12 miles in length, reflecting the statistic that shocked the team into taking action. They are now building up a team of 12 volunteers who will take on the biggest challenge – an ambitious 24 hour walk from Land’s End to Newquay in November 2018, to mark the end of the year-long project.

The sixth #WalkThisWay walk, planned for Sunday 29th April, will be on the Goss Moor Nature Trail which is a 7 mile circular route that passes the Screech Owl Sanctuary.

Anyone who is wishing to join them for the next walk can contact either Mr Jones or Mr Nicholls via the Walk This Way Facebook page (https://www.facebook.com/walkthiswaytalkthisway/).
The #WalkThisWay team has also established a Just Giving fundraising page, (https://www.justgiving.com/companyteams/Walk-This-Way) and you can choose to donate money