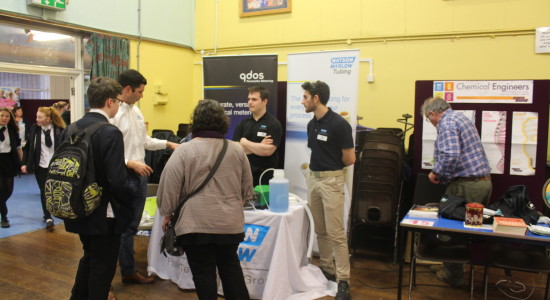 The Newquay Tretherras annual Careers Fayre was ‘a resounding success’ according to Careers Coordinator, Mrs Jeffery. Held at the Newquay Academy on 25th January, the representation from both employers and students was the highest ever with over 30 businesses and even two universities attending.

Mrs Jeffery, Careers Co-ordinator at Newquay Tretherras commented; ‘These events are so valuable as students get to talk to people who are actually in the job or are doing an apprenticeship to get first-hand information. It gives Newquay Tretherras students the opportunity to consider career paths and industries that they may never have thought about before’.

Student comments ranged from the general; ‘It was really helpful’ and ‘there was a lot of advice’ to the more specific, ‘I learnt a lot about how I could become a police dog handler’.

Feedback from the employers was also very positive, stating that students were ‘very engaged’ and asked ‘great questions’.

Mrs Jeffery added; ‘We are so grateful to all the companies that gave up their time to give advice and guidance to Newquay Tretherras students, thank you. Hopefully, next year will be even bigger and better!’